You are here: Home / blog / Sewing with leather 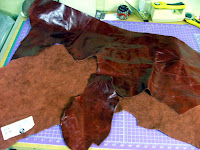 Almost since making my first tulip purse, I have wanted to make one in leather. I found a lovely red/maroon shinny finish scrap piece of leather, priced by the pound at the Carolina Fabric Outlet in Swannanoah, NC. It was a long skinny piece and I thought it might be large enough for a Small Long Stemmed Tulip Purse. Here is photo of the long piece folded so you see part of the front and part of the sweded back.

I researched what I would need to stitch into leather. I have a Juki TL98Q which is certainly strong enough and a 930 Bernina, which is also strong enough. I purchased the suggested leather needles from Bernina World of Sewing on Glenwood Ave. in Raleigh. I also purchased a teflon foot for the Bernina, as it was something I have been wanting. The other supplies were powder to dust on the machine so the leather would slide under the foot smoothly and binder clips to hold seams together before sewing. Both of these suggestions were excellent!

I chose to make the Long-Stemmed Tulip in the small version but had to make some allowances. One was to only be sewing two layers of leather at a time. To do that I had to make the back of the flap out of cloth, and cut out a smaller version of the flap and sew it to the lining of the flap to attach the snap. The other change was to make the handle base linin 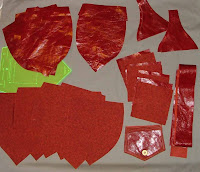 g out of cotton as well. I had a maroon fabric in my stash that matched well. Here is a photo of the two materials.

The thread I choose first was a thick 12wt. 100% polyester. I was a gold color, similar to what is used in sewing the side seams of jean fabric. I couldn’t get the tention in either machine to handle the thickness. Instead I chose a 40wt. King Tut quilting thread. It held well when it was backstitched.

It was suggested in the instructions I found to sew with a large stitch so as not to cut the leather, thereby dividing it into two pieces as you sew. (This is the same problem when sewing the clear plastic onto the name badge holder in the Traveler’s Trio pattern, or the luggage tag in the Traveler’s Tote pattern.) I lengthened the stitch to 3, then 5, then settled on 4. The Bernina has a dial that will lengthen the stitch by skipping every other stitch. The 3 settin 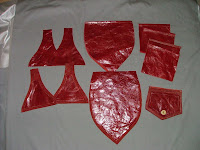 g on it with a skipped stitch looked just right. It is necessary to back stitch or to hand knot the threads when the sewing is finished with leather.

As recommended, I did practice with the needles and thread in both machines before deciding I was ready to try making the purse. Here are the pieces cut out, ready to sew!

In order not to sew more than 2 layers together of leather at at time, I had to modify the pieces as shown here. The back of the purse has a template pocket. For the part attached to the purse, I cut away 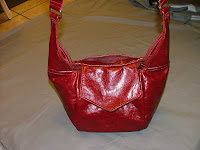 the seam allowance and sewed it to a piece of the lining. The inside pockets I made of leather on the outside and lining for the inside of the pocket.

Here is the finished purse. It is not perfect, but if you use the galloping horse rule, I think I will enjoy it very much!

Visit our blog for all the latest news!

Anything But Boring's Blog

Janice Pope can be reached via email at
info@anythingbutboring.com